Light as a crop protection product?

The light intensity and colour of light don’t just have an effect on the crop but also on pests and their natural enemies.

The choices that a grower makes with respect to light also influence the biological balance in the greenhouse. That applies when installing more assimilation lighting as well as when choosing a certain type of coating or glass. If you allow in more light by using a diffuse coating such as ReduFuse or ReduFuse IR, greenhouse whitefly becomes more active. Fortunately that is also true for its natural enemy, the parasitic wasp, Encarsia. The net result is that greenhouse whitefly is brought better under control when there’s more light. More light also encourages the eggs of aphids and tobacco whitefly to hatch faster, but also those of the predatory mites. It depends on the type of pest and its natural predators as to how the balance ends up at a higher light level.

Every grower knows that insects have a clear preference for colour. It’s not without reason that sticky traps are coloured yellow or blue. The combination of light intensity and light colour influence flying, searching behaviour, distribution within the crop and the ability for orientation, not just of the pest insects but also of the natural predators that attack them. For example, a lot of blue stimulates spider mite to become less active.

Of all the colours, UV light has the most effect on insects. Whitefly, thrips, spider mite and leaf miners all become less active and disorientated at a lower level of UV. This does not apply to predatory mites, which function just as well.  UV has a shorter wavelength than visible light and can be divided into UV-A (320-400 nm) and UV-B (280-320 nm). Hardly any UV-B-light enters a normal greenhouse although this depends on the type of roof. For example, Diamant glass (extra clear, low iron) allows through more, likewise different types of diffuse glass. 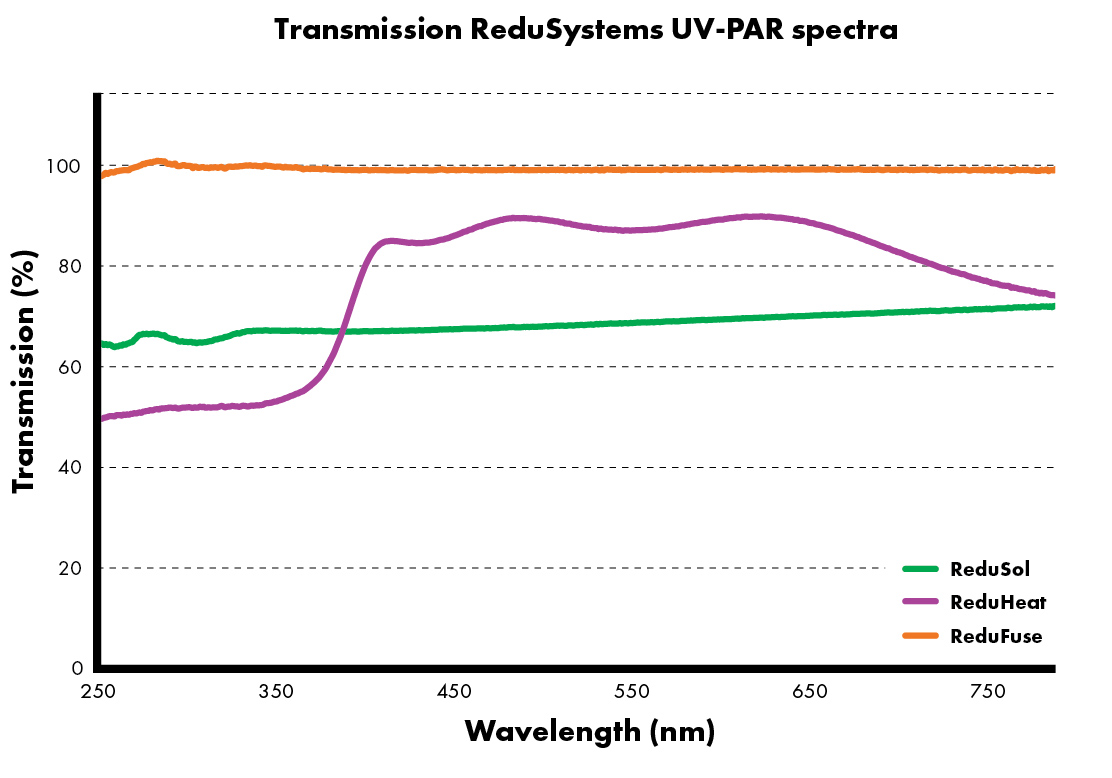 Coatings can also change the spectrum in the UV-range. ReduSol and ReduHeat in particular offer a shading effect in the UV-range. UV-B kills fungi but UV-A actually has a stimulating effect on spore formation, for example, by botrytis. This is an extra reason, in addition to the effect on pest insects, to reduce the level of UV-A.

Research into the effect of light on pests and diseases is undergoing intense development. The use of red light to increase the plant’s resistance to fungi currently appears to offer the most potential. Norwegian and Finnish researchers believe that in time it will be possible to have a light recipe that acts as a crop protector. That would include an increased level of red and a lower level of UV-A, supported by targeted fungal control using the aggressive UV-C. As the development of specific light colour coatings continues this could be an effect to consider further.

Since the launch of ReduHeat in 2005 users often ask us if it is possible to combine different ReduSystems coatings with one another. Just to make it clear, when we talk about combining we mean ‘layering’ one coating over another, not mixing the products because that can definitely cause problems. We...