A diffuse greenhouse roof improves both the vertical as well as the horizontal light distribution. This accounts for half of the positive effect of diffuse light on photosynthesis.

Each layer of the crop blocks out part of the sunlight or assimilation lighting. The deeper you go into the crop the lower the light intensity and therefore the lower the rate of photosynthesis. Light is blocked depending on the type of crop and the structure of the crop, which is determined by the grower. The extent to which the light is extinguished can be expressed by the extinction coefficient.The extinction coefficient of diffuse light is lower than that of direct light, so less light is blocked. Horticultural researchers have known this for a long time: when the sky is cloudy (resulting in a lot of diffuse light) the light penetrates deeper into the crop. However, it is only since the arrival of diffuse glass and diffuse coatings that the effect of this has been clearly documented. Researcher Tao Li carried out trials at Wageningen University to better understand the light distribution and the percentage of contribution by the various effects of diffuse light.

A surprising fact is that it is the improved horizontal light distribution under a diffuse roof instead of the (more expected) vertical light distribution that contributes the most to better photosynthesis by the entire crop. The more uniform horizontal light distribution (see figures) accounts for 33% of the effect, while the improved vertical distribution contributes 21%. A major reason for the positive effect of better horizontal distribution is that no sun spots occur under a diffuse roof. Where there are sun spots the light intensity is high. The plant adapts itself to this which costs time. During this period photosynthesis is not at its optimum. Because the location of the sun in the sky continually moves, and with it the sun spots in the crop, leaves are constantly having to adapt. Also, the light intensity in the sun spots can be so high that photosynthesis is temporary inhibited. Diffuse light ensures that changes in light intensity are minimised in all areas of the crop so that the plant does not have to adapt. This improves the overall functioning.

The improved vertical distribution of light under a diffuse roof ensures better assimilation by the leaves deeper in the crop while the top leaves are less inhibited by excess light. Nevertheless, the better light distribution in both directions only accounts for half of the improved photosynthesis by the entire crop.The other half comes from adjustments made by the crop itself. As the light penetrates deeper into the crop the leaves behave more like sun leaves and not as shadow leaves. Because they constantly receive more light than under an ordinary greenhouse cover, their capacity for photosynthesis increases so they function better. This aspect accounts for 23% of the positive effect.The remaining part (23%) is due to a combination of factors, such as more leaf surface per square meter greenhouse (leaf area index) and higher levels of nitrogen and chlorophyll in the leaf. The opening of the stomata also plays a role. Changes in light intensity delay their reaction. If – as a result of the diffuse roof – fewer changes take place, CO2 can enter through the stomata much more easily.The researcher has documented these changes in tomato plants but the better light distribution is similar for all crops and probably the other effects too. For the vast majority of crops diffuse light results in better photosynthesis. Wether this is then translated into better yield and product quality depends on the type of crop and the cultivation practises. 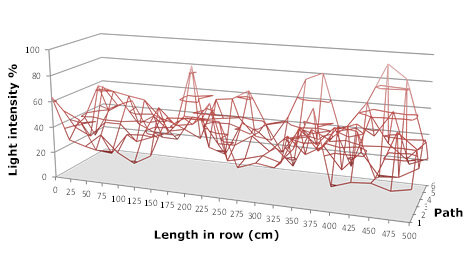 Figure 1: Light peaks in a greenhouse under normal glass.
Source: Wageningen UR. 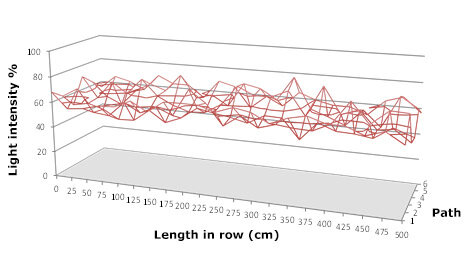 Both pests and their natural enemies respond to the colour and intensity of light. This means that coatings can affect the biological balance in greenhouses.

These days, Phalaenopsis growers are letting more light in. This requires getting the right balance between screens, coatings and humidity.

In search of the optimum light level for potted plants

Diffuse light benefits almost all potted plants that have been tested in trials. Often the grower can allow in a greater amount of light, which will make the plants grow faster.