The summers of recent years have resulted in a turnaround. More than ever before, growers are looking for the optimal shading and cooling combination. The instruments they use for this purpose are coatings, movable shade screens and humidifiers.
“In Central Europe, growers are increasingly installing high-pressure misting systems. They do this out of dire necessity, because in a hot summer the air is extremely dry,” says Jelle Hoogland, who advises vegetable greenhouse operations in Central and Eastern Europe.
When humidity levels are low, the plant closes its skin pores (stomata) to prevent dehydration. This blocks the absorption of CO2 and halts photosynthesis. Furthermore, the plant’s temperature increases when its evaporation stops and it is no longer able to cool itself. Closing the skin pores is a temporary measure, which the plant is unable to sustain for an entire day.

“The coatings reduce the plant’s stress caused by too much light and heat. This enables the plant to increase its evaporation somewhat. However, in extreme conditions it still stays too dry,” says Hoogland.
This is when a misting system is a great idea. The nozzles emit very fine water droplets that will have evaporated before they reach the crop. As a result, the crop does not become wet. Misting has two effects; the humidity goes up and the air temperature drops. The latter is because the evaporation of water consumes energy. 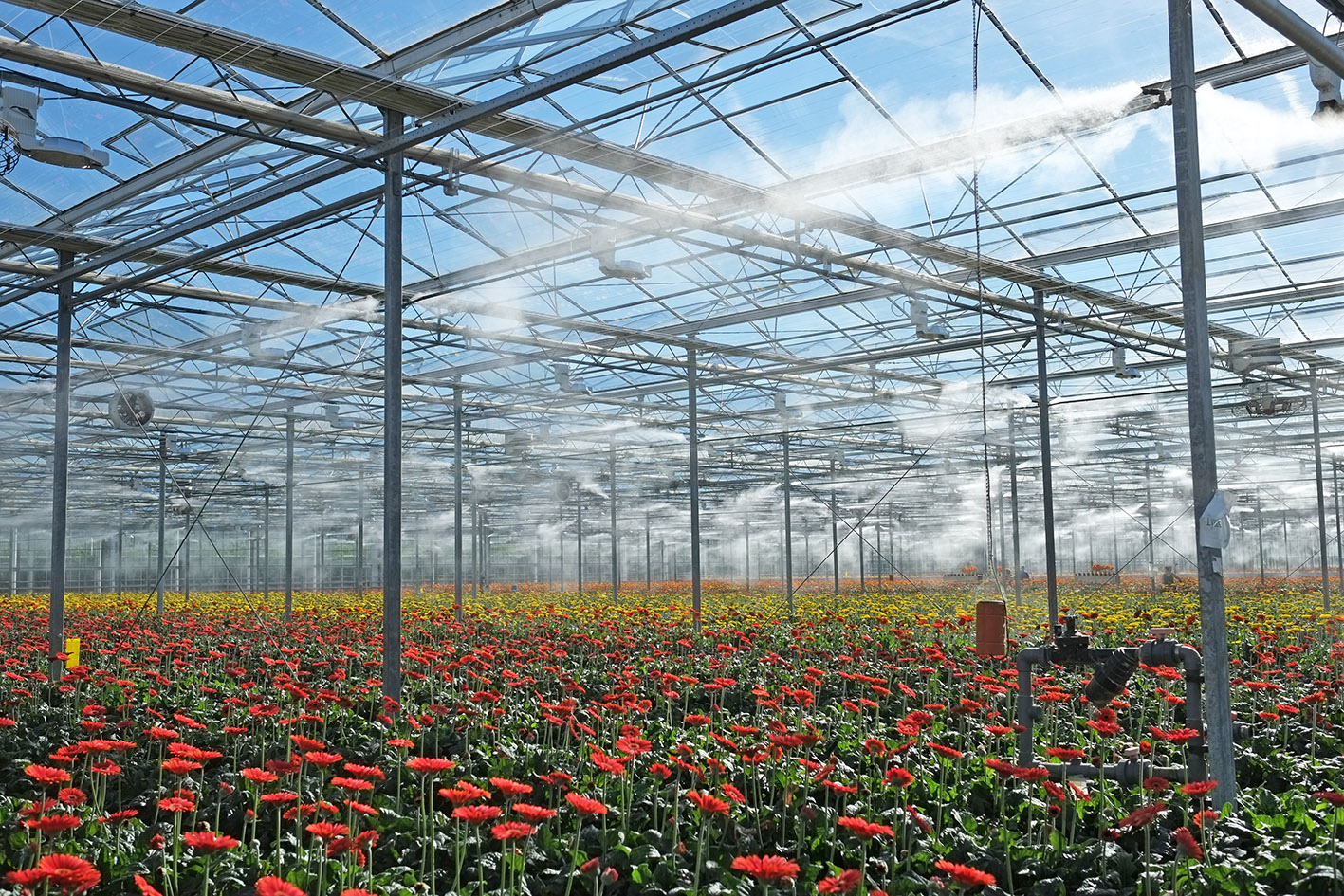 This energy is extracted in the form of heat from the air in the greenhouse. This is easily felt; the temperature can drop by as much as 4°C.
“The advantage is that the vent windows on the wind side can be kept closed for longer periods of time. As a result, higher CO2 levels are maintained in the greenhouse and the plant stays more active,” he says.

So why would you still need any coatings? Hoogland: “Without coatings the light still enters the greenhouse at full intensity – often as much as 850 - 1,000 watts. This can create stress and burning together with the associated problems; poor fruit setting, stagnating growth, imbalances within the crop and deformed fruit. We are seeing that more and more growers are looking for smart tool combinations. Coatings, humidification and shade screens supplement each other,” he says.
Naturally, you would adjust the type of coating with the other instruments used. ReduFuse when possible; ReduFuse IR or ReduHeat when heat has the upper hand – and when needed topped up with ReduSol or SprayChalk in the summer when radiation is really high.

Some growers use roof sprinklers for cooling. This is cheaper than a high-pressure misting system, but they also have drawbacks. More water is consumed which could be used for watering the crop in case of scarcity. Furthermore, the water must not contain too much chalk and iron, because that would create deposits on the greenhouse roof cover. In case of excessive deposits, you must first dissolve the chalk/iron layer with citric or oxalic acid before you can remove the coating with ReduClean.
“Another point to consider is that it is more difficult to select an appropriate coating when roof sprinklers are used. When coatings are wet, they become more transparent. This especially applies to ReduFuse – the diffusing effect is then lost. ReduHeat and ReduFuse IR partially retain their heat-reflecting effect. Actually, ReduSol is best used with roof sprinklers, although this coating too will become more transparent. The solution here is to apply a thicker layer,” says Hoogland.
The key issue still remains: How do I keep my crop in optimal condition in the summer months with a coating and the other tools at my disposal, to achieve high production with high quality.