Daily light integral should be guide for optimal production of ornamentals

An increasing number of ornamental crop growers regularly measure the amount of light in the greenhouse. But just as important as the light level at any given time is the total light sum or daily light integral (DLI) received by the crop.

Light measurements were originally not developed for horticulture but for humans. The human eye is sensitive to roughly the same wavelengths as those in the Photosynthetically Active Radiation (PAR) range. But we see some colours better than others. This has clearly been taken into consideration with light measurements and is where the unit ‘lux’ originates. Some growers still express the strength of their assimilation lamps in lux. But this unit is not at all suitable to characterise the light used by plants. Light consists of particles called photons. The plant experiences every particle as being equal: Each particle contributes equally to photosynthesis. Therefore, it is logical to refer to the quantity of light in number of particles. The unit used is a mole (or micromole µmol); One mole comprises an enormous number of particles, namely 6 x 10 23. Because there is a constant stream of light particles it is referred to as a flux which is expressed in µmol/m2/s, so the number of particles per m2 per second.

Measuring light in the greenhouse

Measuring light in the greenhouse is not easy. Although a PAR-metre, which measures the relevant part of the light, is available, its placement of a light meter is important. Also, the light varies with the time of day and with the weather. For each crop there is an optimal light intensity at which it functions best: highest photosynthesis and least stress. If there is insufficient light, production lags behind. So how do you know if the crop receives enough light if the intensity and the measurements always fluctuate? The daily light integral (DLI) can help answer this question. The DLI is the total amount of PAR light the crop receives on one day. Thus the amount of moles per m2 per day: mol/m2/d. Sensors are available that automatically register the DLI. 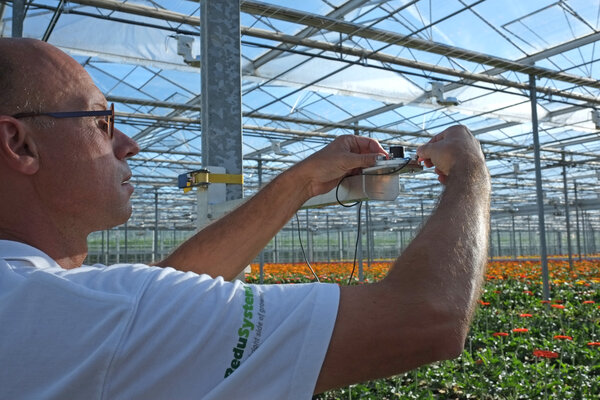 During the course of a year the DLI can vary substantially, from 2-5 mol/m2/d in low light periods in temperate regions to 25-30 mol/m2/d in the high season in regions with lots of light. Each crop has an optimal DLI-range. If the amount of light falls below this on any one day, not enough is produced. If it rises above this, light is wasted and damage may occur. Also, the light level at any one moment makes a difference. If it rises too much, damage occurs even if the DLI remains within the limits. Purdue University in the USA has carried out a lot of research on optimal DLIs. In general, the quality of the crop increases with rising DLI, until a maximum limit is reached. For many ornamental plants the researchers also noticed that the time to flowering was shorter, until a maximum limit was reached. In other trials they saw that bedding plants can often deal with a higher DLI, and therefore grows better and faster than usual. This is in line with research findings made by Wageningen University & Research on potted plants. These too could cope with higher light levels, provided that the humidity and the plant temperature can be kept within the limits.

The Americans divide ornamental plants into four categories: shade plants (3-6 mol/m2/d), medium light crops (6-12 mol/m2/d), light loving crops (12-18 mol/m2/d) and high light loving crops (above 18 mol/m2/d). A few examples: Ferns, Maranta, Saintpaulia and Spathiphyllum flourish best at average DLI of 4 mol/m2/d. The American researchers include Phalaenopsis in this category although Dutch growers currently allow 5.5 mol at the beginning of the cultivation phase and increase that to 8 at the finishing stage.
A large range of well-known houseplants such as cyclamen and Kalanchoe are content with 6-8 mol/m2/d. Fuchsia and hortensia prefer it to be slightly higher. Carnation, potted rose and pelargonium are at the top of the medium light crops. Many garden and container plants have an optimal average of 12-16 mol/m2/d. Cut flowers such as alstroemeria, carnation, chrysanthemum and rose are in the category 14-20 mol/m2/d, where the last two can even cope with somewhat more.

For real shade loving plants as well as the medium light crops ReduSol is a good coating that shades out much of the natural light. If the crop can deal with more light, the preference shifts towards diffuse coatings. These remove bright sun spots which can cause damage. For the short term, the peaks in bright light can be shaded out with a shade screen. In cases where a lot of light is desired, but where plant temperature should not rise too much, coatings that reflect infrared - ReduHeat and ReduFuse IR – are the best options.

Just as you insure your home against disasters, you can also insure your crop. A coating on the greenhouse cover is an insurance which helps you cover risks. It guarantees that your crop is protected from extreme weather conditions and is not negatively affected by sudden changes in the weather.

Normally, he would apply two layers of ReduSol. But in response to the recent hot summers, Jean-Yves Scardigli decided on a new system: three layers applied in May, June and July. That works well in the hot climate of southern France.