Growers can extend the life of greenhouse film

UV radiation, crop protection agents and metals all adversely affect greenhouse plastics. As a grower you can implement a number of measures to mitigate these effects. The use of coatings also extends the life of plastics.

Hyplast, located in the municipality of Hoogstraten in Belgium, is a subsidiary of RKW Group and is one of the main producers of films for horticultural greenhouses and tunnels. The company produces 45,000 tonnes of polyethylene film annually. To an outsider the different films very much look alike, but due to a variety of additives, there are dozens of different versions.

‘We can produce custom-made film for anyone. We take the kind of crop, the local weather conditions, light transmission, growing needs, mechanical properties such as flexibility, and more, into account,’ says Karen van den Bergh, R&D Engineer.

Plastics do not last forever: they age and their properties change. ‘UV and crop protection agents in particular cause this change,’ she says.

‘UV radiation affects the chemical bonds in the polymers that make up the plastics. This causes the polymer chains to break. Additionally this produces radicals; highly reactive substances that in turn attack the polymer chains,’ her colleague Hendrik Oudehinken adds.

This process can be slowed down by adding UV stabilisers. ‘This is comparable to suntan lotion. The UV radiation is “absorbed” causing the stabiliser’s structure to change. This change is only temporary and the stabilizer reverts to the original structure, while releasing heat. This is how UV energy is neutralised,’ he says. Other additives added to plastic capture the released radicals. While they do break the polymer chains, there is no subsequent damage.

Despite these additives, the aging process nevertheless proceeds at a slow pace. ‘It is impossible to capture 100% of the UV radiation,’ he explains.

Furthermore, the UV light is needed, for example for the bumble bees in the greenhouse to orient themselves and for the proper colouring of some plants, such as tree nursery crops.

So what can a grower do to protect his/her greenhouse or tunnel film? The approach is twofold: be careful with certain chemical substances and reduce UV radiation. ‘By using crop protection agents sparingly, and that definitely includes the use of sulphur evaporators, you extend the life of the plastic,’ says a third colleague Luc Paepen.

‘Furthermore, chlorinated substances, such as cleaning agents, are disastrous. They break down HALS, the protective substance in polyethylene. PVC gutters, which contain chlorine, also reduce the life of polyethylene. Furthermore, it’s good to know that metals function as a catalyst in degradation processes. Having metal posts in direct contact with the plastic, for example, is not a good idea. The plastic will also degrade when there are rubber pads between the frames, because rubber contains sulphur,’ says Paepen. 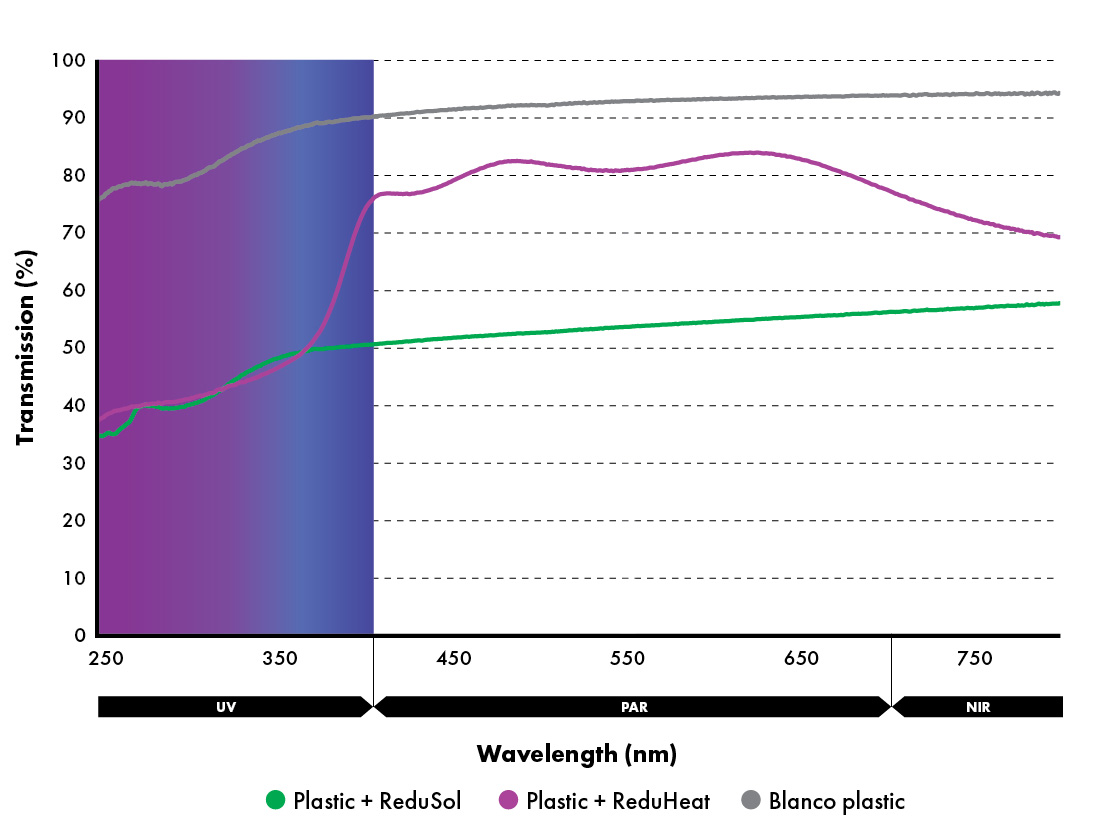 By contrast, shading agents that reflect light and/or heat can protect the film, because they block part of the UV. ‘Reflection of UV radiation prevents the film’s breakdown,’ says Paepen. ‘Furthermore, the coatings help reduce the temperature in the greenhouse and that also extends the life of the plastic. At a temperature increase of 10°C, degradation occurs twice as fast; a lower temperature slows down the process.’

Roel Weijers, R&D Manager at Mardenkro, explains the UV-reflective properties of coatings: ‘The heat-reflecting coating ReduHeat largely allows PAR light to pass through, but blocks a large part of the near-infrared as well as UV light. The reduction of the latter protects the plastic. A coating like ReduSol uniformly blocks the solar radiation throughout the UV and PAR spectrum. The amount of UV light that is reflected depends on the coating’s thickness (number of buckets per hectare) but it will extend the life of the plastic as it is applied during the season when the UV radiation is the highest.’

Which ReduSystems product is best for my situation?

ReduSystems coatings on your greenhouse roof offer a range of options for creating the required indoor climate. Whether it's a matter of diffusing light or filtering out certain colours of the light spectrum, in 2015 there are ample possibilities. However, with all options available it is actually becoming...

Controlling conditions according to plant temperature opens up more possibilities

The temperature of the crop sometimes differs widely from the greenhouse air temperature. For this reason, it is a good idea to continuously measure the crop temperature.