ReduSystems is constantly expanding its product package. This steadily increases the available options for controlling natural light year-round. To keep crop advisors informed of the optimal use and combination of coatings, the ReduSystems team held a number of interactive knowledge sessions over the past few weeks. The highlights:

We are seeing a global shift towards an increased use of heat-reflective coatings in the vegetable cultivation sector. Vegetable growers have been convinced of the benefits of diffuse light for some time and are therefore opting for ReduFuse. However, the hot seasons of recent years have resulted in a switch to ReduFuse IR, a diffusive coating that also reflects heat.

In an extreme continental climate, the summer peak requires additional measures, such as ReduSol or SprayChalk, for example. This is consistent with the trend of applying multiple coatings on top of each other during the course of the season. This is increasingly happening in a systematic way: at the beginning of the year the grower determines when to apply the coatings and applies the coatings according to plan.

Ornamental growers are not yet making use of ReduFuse all that much. Some cut flowers – roses, chrysanthemums – are able to convert a great deal of light into production, but the larger part of the ornamental crops perform better at lower light levels. The products most often used in the ornamental cultivation sector are ReduSol and ReduHeat. However, diffuse coatings are gaining ground here as well, often in combination with extra protection in the summer. A good example is the approach used for Lisianthus: ReduFuse in the spring and an extra layer of ReduSol in the peak of summer.

An important development in recent years is the focus on more light in the autumn, winter and early spring. After mid-August, the available light quickly declines. This is when it is time to remove the coatings that are no longer required using the right ReduClean product. This increases the level of light in the greenhouse.
In addition, ReduSystems has developed a three-step plan to even further increase light in the greenhouse:

The sessions concluded with a sneak preview of the renewed ReduSystems advisory tool. The renewed ReduWizard not only provides shading advice for the summer period, it also identifies the products that are suitable for use by growers during the winter. The tool bases its recommendations on location, crop, variety, type of greenhouse and additional shading options. 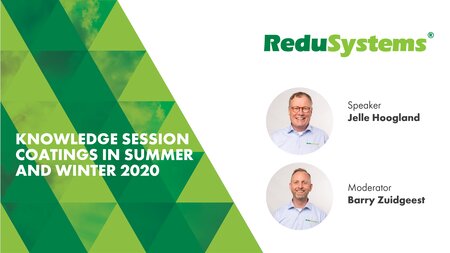 The knowledge sessions are directed at crop advisors in the vegetable, flower, potted plants and soft fruit cultivation sectors. Send us an e-mail at sales@redusystems.com to receive a link to a recorded session.

Every percent can be converted into higher production. Mardenkro offers a package of solutions designed to improve the incidence of light into a greenhouse by as much as ten percent.

Not only the amount of light but also its colour determines the growth and production of roses. The coating ReduFlex Blue allows relatively less blue light to enter the greenhouse. Commercial trials have shown that this has a positive effect on stem length or production. The rose growers who took part...