If you scatter light when radiation is high, the total photosynthetic efficiency of the entire crop increases. This is the main reason why diffuse light leads to greater production. Furthermore it results in less heat stress.

Even in cases where there is no stress, the efficiency of photosynthesis decreases at a very high light intensity. The amount depends on the characteristics of the plant.
Up to a certain point the amount of photosynthesis is virtually proportional to the level of light. But then at a given moment the effect weakens. This can be seen in the photo response curve (see figure). 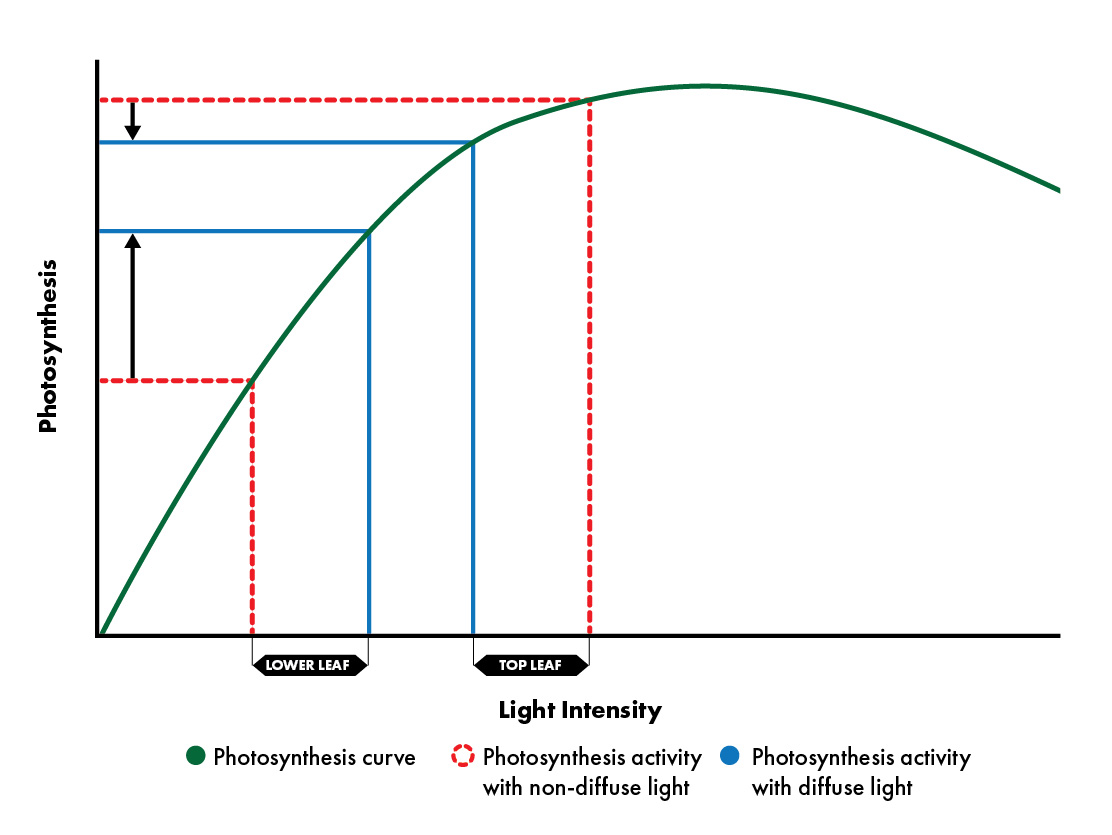 The exact course of the curve is different for each crop but the principle is always the same. On the steep part of the graph the efficiency increases with more light, followed by a flatter part where more light contributes little to the amount of photosynthesis. At a certain point more light can even cause damage.

From a production standpoint it is necessary that as many leaves as possible photosynthesise in the steep part of the curve. This is helped by better distribution of light, as can be seen in the graph. The quantity of direct light that falls onto the leaf is photosynthesised to yield a certain amount of sugars. If you diffuse the light, less light falls onto the leaves at the top but more falls onto the lower leaves. Their combined photosynthesis increases to above the original level. This occurs because the lower leaves move further up the steep part of the curve and the leaves at the top move towards the left, also towards the steeper part.

The second positive effect of diffuse light is that the plant itself changes. The leaf’s photosynthetic capacity is determined by the circumstances in which is grows. This leads to the creation of sun and shadow leaves. With diffuse light more leaves grow under a higher light level, so they behave more like sun leaves. That is to say, their photosynthetic capacity increases.

An additional third factor – depending on the type of crop – is that the total leaf surface area increases, or the leaves become thicker, in a greenhouse with diffuse light. As a result the total assimilation capacity increases. You can say there are more solar panels to collect the sun energy.

Diffuse light lowers the temperature, particularly at the top of the crop. As a result transpiration reduces and a grower doesn’t need to drain off as much moisture. When it is extremely warm damage can occur due to the formation of so-called free-radicles, which attack chlorophyll. This effect is seen less when the light is diffuse so this aspect also allows a plant to function better.

A special point to consider is photo-inhibition. This is the phenomenon whereby too much light inhibits photosynthesis instead of stimulating it. Instead, the leaf begins to exhibit chlorophyll fluorescence that can be measured using a fluorometer. Under normal glass, the amount of fluorescence quickly increases as radiation rises. Under a diffuse roof this is much less. Said simply: The plant experiences less stress.

All these factors together result in higher production and better quality under diffuse glass. Nearly all types of crops benefit from it.

With light sensitive crops – such as many pot plants – diffusion provides an opportunity to give a plant more light: A grower can be less afraid of causing damage by light or heat. In both trials and in practise it’s been shown that operating at a higher total light level leads to a significant rise in production and growth rate – above the positive effects that diffuse light already provides - providing that the air humidity is well managed.

At the forefront of horticultural innovations

Mardenkro maintains close contact with scientific researchers and is a member of the Club 100: a group of prominent horticultural suppliers that helps finance and steer research at Wageningen Greenhouse Horticulture. This way Mardenkro is at the forefront of horticultural innovations.

Don’t block the light - manage it!

The ReduSystems variety of coatings has grown significantly in recent years. Growers are leveraging the possibilities to develop a customised approach for their crop. A number of growers is switching over to another coating, while others have every reason to stay with their current choice.