Adjust the watering under a coating

A coating on the roof has consequences for the water management. Jos Beerens of Grodan explains what the grower needs to bear in mind.

The greenhouse climate and the crop mutually influence each other. Light and temperature also play an important role. Because both these climatic factors are affected by coatings, the plants also function differently. This is also the intention of the coating. It makes sense to also consider this when irrigating the crop.
“It's not about making large adjustments, but improvement return on investment often lies in the detail: adjustment of start and stop times of the irrigation regime and the light intensity at which you are going irrigate,” says Beerens, business support manager for rockwool supplier Grodan.
He says that the influence of watering as a control instrument is often underestimated. “Coatings that block light often make the crop more vegetative. The response to watering must then be to steer towards generative growth, for example, by allowing the water content to drop some more after sunrise, before the irrigation begins."

Coatings are divided into those that protect against sunlight, those that protect against heat and the diffuse types. Under a coating that blocks sunlight, such as ReduSol, the plant receives less direct light. “That makes a difference especially in the morning and evening,” says Beerens. “It means that generally a grower should irrigate later than when there is no coating. It is important to realise that a solarimeter outside the greenhouse (which measures the sunlight) is then no longer completely reliable as a tool. You need to set the light intensity at which you start irrigating higher or measure the light in the greenhouse. A coating that reflects sunlight therefore has consequences on the start and stop times of the irrigation regime and the light settings in the computer.”
He points out that it is also possible to control the water content in the slab. The response by the plant to the climate has direct consequences on the water uptake. Grodan has developed the GroSens system so that a grower can measure the level of water in the slabs at several places in the greenhouse. Taking a measurement at just one place is not representative enough. 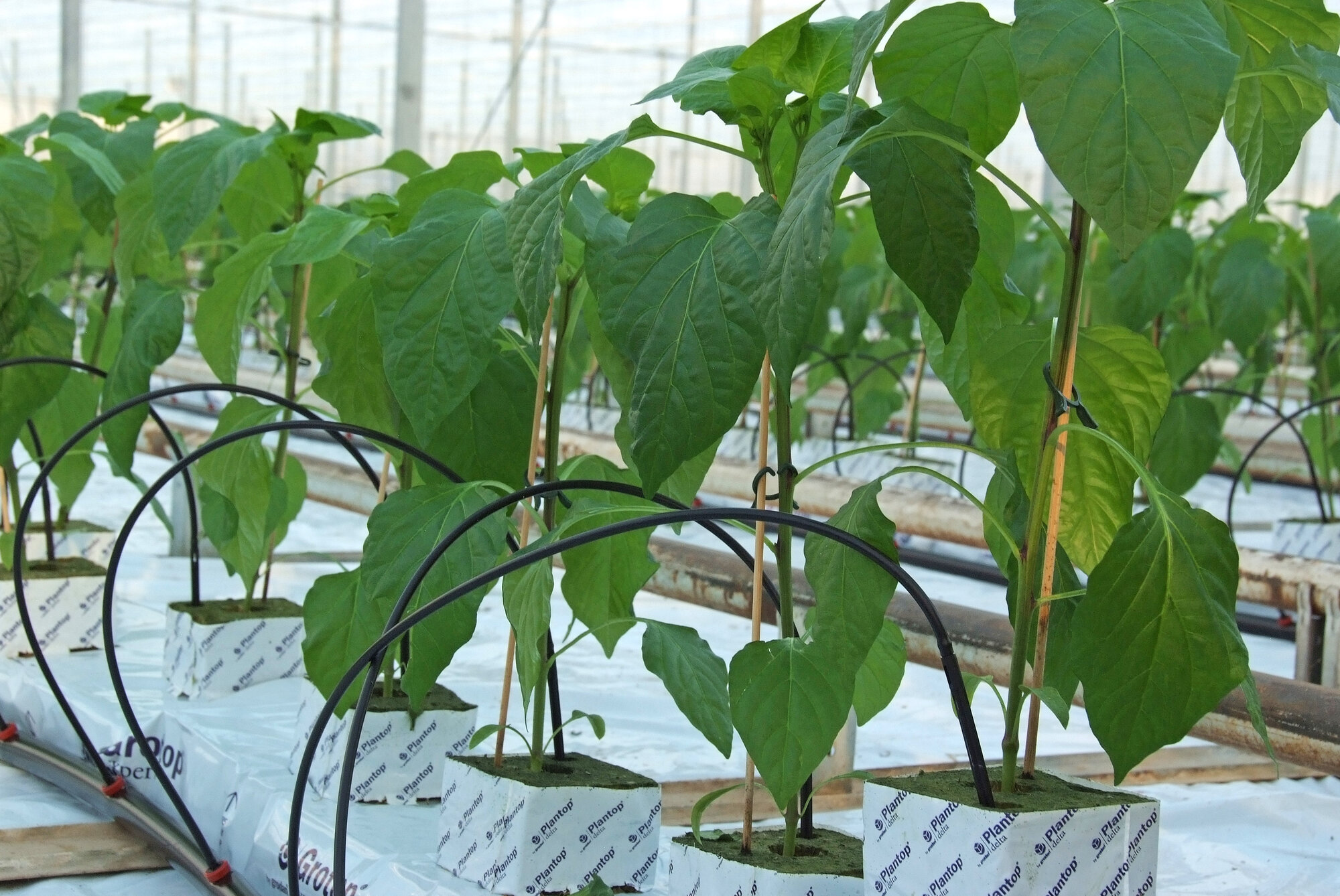 A heat reflecting coating, such as ReduHeat, blocks the heat radiation (infrared) but lets virtually all the PAR light through. That prevents the crop suffering heat stress. Beerens: “You should keep in mind that the crop heats up less quickly in the morning. It might be necessary to compensate for that by using additional pipe rail heating. And attention also needs to be paid to the water supply; this takes longer to get going in the morning. In the middle of the day at higher light intensities (> 700 watts) the plant suffers less stress under ReduHeat, meaning that it can take up more water than when there is no coating. Therefore it is often possible to irrigate longer at the end of those particular days.”
Diffuse coatings, such as ReduFuse or ReduFuse IR (which also reflects heat), ensure better light penetration in the crop and less stress. This means that the crop is often much more active and therefore transpires more. “The water uptake is then greater and it is very useful to keep an eye at which moment this increases. In general, you will need to irrigate longer under a diffuse coating. Normally less drain is needed (< 20%) after 3pm. But if the crop remains active longer, reducing the water content, you can still give an extra watering."

He notices that crop advisors remain on the side of caution and often prefer to advise 10% more drain than is necessary. “We like to monitor the radiation (drain % = radiation sum day/100) and the decrease in the water content of the slab during the night. The goal is a reduction of 8 to 10%. If this is not achieved you need to figure out why not. Is it due to stopping too late or starting too early? Is the climate too passive? And why is that: too much screening or because the heating is turned off too quickly? Every grower needs to be conscious of this and take into account how the coating influences the crop. All crop advisors visitng the greenhouse shoud be informed that there is a coating on the roof so that they can take it into account when giving advice."
Finally, he says pay attention to the EC of the nutrient solution. If the plant, for whatever reason, takes up less water, it also receives fewer nutrients. “Then you have to adjust the EC and be more critical about reducing the EC based on light quantity. We are not talking about any mistakes but just things that can lead to improvements. The water content and the EC during the day indicate if the plant is feeling comfortable or if something needs to be adjusted.”

How to best convert light into production