In recent years, extensive trials were performed to assess the benefits of diffused (scattered) light. Initially, it concerned trials to demonstrate for each crop if added value was achieved. Subsequently, the researchers assessed why diffused light leads to higher production and better quality. Lately, the research goals are more about fine-tuning.

Based on the trials, researchers concluded that virtually any crop benefits from scattered light. In general, higher scattering is better (higher haze or F-scatter value). For each crop, it is necessary to consider if the benefits outweigh the loss of light in a certain period. Modern diffuse glass has virtually no loss of light. A diffuse coating lets any light from a straight angle in with virtually no loss. Any slanted light is reduced by only a few percent. In spring and summer, the benefits certainly outweigh such small losses.

Research done by Li Tao (Wageningen UR) significantly enhanced our insight into the benefits of diffused light. The light is distributed better, both in horizontal and vertical terms. Remarkably, the improved horizontal light distribution is even more important than the improved vertical distribution, while in the early years, deeper light penetration was one of the main arguments.

Under a diffused greenhouse roof there are no light spots or hard shadow lines as the light is evenly distributed. Better horizontal distribution prevents that individual plants or leaves have to continually adjust to different lighting conditions. These adjustments are hard on the plants, as shown by the research results of Elias Kaiser (Wageningen UR). It can take up to fifteen minutes for the photosynthesis system to adapt to the new light conditions, and it may have changed again during that time. Photosynthesis, in particular storing CO2 by the Rubisco enzyme, therefore continuously lags behind the conditions. This costs production, and the losses can be significant. It is therefore important to dampen these changes in light intensity: ReduFuse or ReduFuse IR are excellent instruments to achieve this. 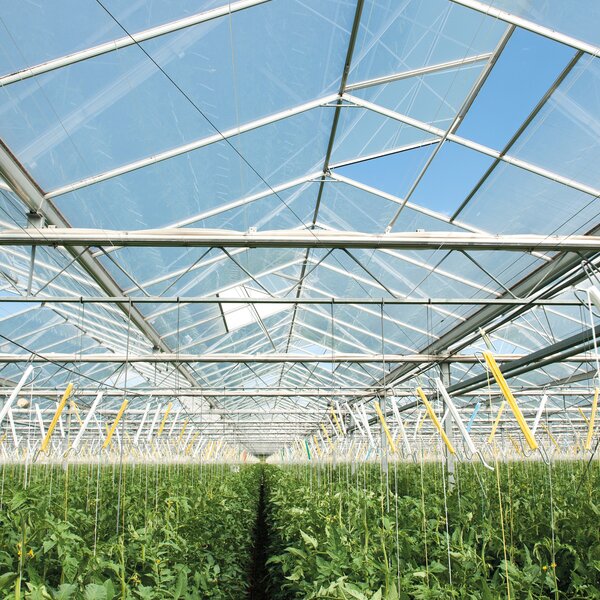 The vertical distribution light is also important. Under a diffuse coating, the top leaves receive a little less light and the leaves in the middle receive a little more. Both aspects work in our favour: heat-stress to the head of the plant is avoided, and the middle leaves participate more active in the photosynthesis.

Heat stress has a number of phases. First, the plant will start evaporating far more at rising leaf temperatures. This means that the grower has to ventilate to control humidity. During continued over-heating, free radicals are formed. These are molecules that react spontaneously with everything around them and thus damaging everything in the cell, including the photosynthesis system. A special point of attention is photo inhibition. If the plant receives too much light, it suspends the photosynthesis system for protection. This does not cause damage - but there is a limit. After some time, the high light level, in combination with the increasing leaf temperature, causes the formation of free radicals. This is why ReduFuse IR is highly recommended in hot climates. The coating provides better light distribution while reflecting the harmful infrared radiation.

Through better light distribution, both horizontal and vertical, under the diffuse coating, the crop changes. More leaves will become active, increasing their photosynthesis capacity. The quantity of leaves in the greenhouse also increases.

Combined, all these aspects result in better growth and production. The production increase is different for each crop but amounts to 5 to 10 %.

Ten years ago, cucumber was the very first crop for diffuse glass trials at Wageningen UR Greenhouse Horticulture. Under an older version of diffuse glass (with 4% light loss), production increased by 4.3% and the number of fruits increased by 7.8%. The researchers estimated that without any light losses, the production would have increased by 7.8% in kilos and by 11% in the number of cucumbers. This was a crop grown from April through July. At high radiation, the temperature of the crop was 0.2 to 0.8% lower in the top, and 0.4% higher in the bottom of the crop under the diffuse roofing, compared to regular greenhouse glass.

Five years later, a trial with an early cucumber crop resulted in production at 6% higher, with both more cucumbers and heavier fruits. At Mardenkro’s request, Botany Horst researched an early stage ReduFuse. A summer crop under the diffuse coating resulted in a 4.3% production increase and 7.1% increase in class I fruits. Remarkably, the crop in the greenhouse with the coating was more vibrant after a period of heat. ReduFuse was further improved since this study.

Most research has taken place with tomato plants. Wageningen UR Greenhouse Horticulture found an increase in production by 8-11% for year-round crops under diffuse glass. The production under ReduFuse was higher by 5% (started in May, removed in early September). The higher production was mostly due to a slightly higher fruit weight and to a lesser extent tothe increased formation of clusters.

The crop under the diffuse roof, including ReduFuse, was less sensitive to Botrytis. The milder greenhouse conditions causes increased resistance. The dry matter content of the stems was slightly higher, therefore reducing potential loss due to Botrytis. In greenhouses with diffuse coating, crop consultants see better setting, heavier fruit and fewer quality issues. ReduFuse sees the best results with a somewhat generative crop.

Because of trials in years with a poor summer, the results of Hoogstraten Trial Centre were less convincing. Still, the use of diffuse coatings is significantly increasing among paprika growers. Practical experience seem to be more leading than research results. Growers report better fruit quality in summer, higher production, lower plant temperature and better control capabilities, thanks to a more stable greenhouse climate.

From Mardenkro’s own measurements, it is clear that fruit temperature is over 5o C lower under ReduFuse compared with an uncoated greenhouse roof. This significantly reduces the risk of burned fruits, which, for sensitive varieties, is a major benefit. Because evaporation remains at a more stable level in an even greenhouse climate, calcium issues such as blossom end rot occur less.

In Dutch conditions, ReduFuse is mainly applied in green peppers and pointed peppers. In Central and Southern Europe, growers mainly apply ReduFuse IR for these types of peppers, and ReduFuse is applied to all sweet peppers.

The hot summer of 2018 was a learning curve for many growers. In extreme conditions such as those, the crop needs much more protection. With this in mind, many growers are taking a closer look at ReduFuse and ReduFuse IR.