Every percent more light in winter is pure profit

Light is the limiting factor in production in winter. Every step taken to improve light ingress is therefore welcome.

If all climate factors except one are right, that one factor will determine the production result. That’s the limiting factor. In north-western Europe, the limiting factor in winter is almost always light. Therefore, every percent more light in the greenhouse will lead directly to better production. So it’s worth paying a little more attention to this.

There is a long list of steps you can take to increase light ingress in winter. Some of these are things that everyone can do and some are primarily relevant at the greenhouse construction stage. 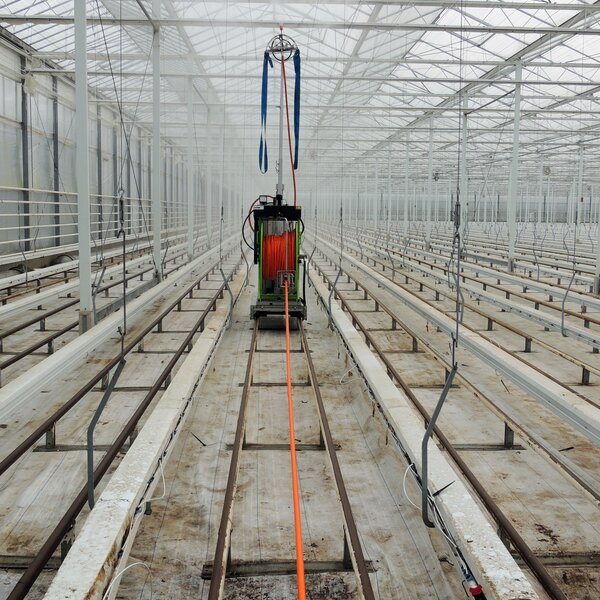 The first aspect is obvious but often seems to be underestimated in practice: keeping the greenhouse roof clean, both on the outside and the inside. Paying too little attention to cleaning the roof can cause light loss of as much as 10% during the course of a year.
The outside is easy to keep clean with a greenhouse roof cleaner, but the inside of the greenhouse roof can only be tackled properly in between crops. Mardenkro produces a relatively gentle glass cleaner for both the outside and the inside: GS-4 and GS-4 Xtra. No hydrogen fluoride in gaseous form is released and the product doesn’t affect the surface of the glass if it is rinsed off with plenty of water before it dries. GS-4 and GS-4 Xtra is not suitable for use on coated glass.

In winter, sunlight mainly enters the greenhouse at a low angle. There are two ways to handle this. The first is at the construction stage and the second is during use. At the construction stage, it’s important to choose the best orientation for the greenhouse roof. Ridges running north-south provide the best light ingress on an annual basis while an east-west orientation allows more light in during the winter. Therefore, if the amount of winter light is a key factor for the crop, the latter option is a better choice. The shape of the greenhouse roof also makes a difference. A Venlo greenhouse lets more light through than a curved roof such as a polytunnel.

Part of the light entering at an angle is reflected off the greenhouse roof. The lower the angle of incidence, the more reflection there will be, and the angle of incidence is always lower in the winter. So the reflected light doesn’t benefit the crop at all. This season Mardenkro is launching its new AntiReflect coating, which allows at least 3% more light into the greenhouse. The first users are being supported with light measurements.

Condensation on the inside of the greenhouse roof can also cause a considerable amount of light loss. This is an important factor in winter as the roof is almost permanently wet. The type of condensation also determines the light transmission. Large droplets eliminate a lot of light – as much as 5-8%. A finely distributed film of water allows more light through. The new AntiCondens coating for glass acts like a wetting agent and creates a film of water over the glass. Initial experiences in practice have been positive: measurements taken at a tomato nursery in May 2017 showed that light ingress using AntiCondens was 6-7% higher than with uncoated glass.

Once the light is inside the greenhouse, as much of it as possible needs to be absorbed by the crop and not by the floor or the structural components. So the interior of the greenhouse needs to be as reflective as possible: white plastic on the floor and a powder coating on all structural components. Powder coating reflects around 80% of the light. PipePaint from Mardenkro can be used to make heating pipes more reflective and prevent corrosion.

The greenhouse horticulture business unit at Wageningen University & Research has for several years been working on developing a greenhouse optimized for winter use: the Winterlight greenhouse. The first step was to determine which factors had the greatest impact (mainly the factors described above). The model greenhouse in Bleiswijk was opened last February. It has highly translucent, diffuse glass that has been specially etched to make it antireflective. An innovative, high-transparency screen is fitted in a W shape for maximum light transmission when closed. The greenhouse structure is finished with a special powder coating that reflects 87% of the light.

Model calculations carried out in advance of construction showed that the potential light gain could be as much as 10.5%, and measurements in the greenhouse have confirmed this. At the moment, cucumbers are being grown in the Winterlight greenhouse. The crop ends in early December and production is currently heading towards 110 kg/m².