Incoming light in winter certainly can be improved

During the winter natural light is the limiting factor for growth and production: Every reason to look at optimising the light entering the greenhouse during the winter. Frank Kempkes of Wageningen UR Greenhouse Horticulture thinks it’s possible to improve it by 15-20%.

To achieve such percentages improvements on all fronts are needed. Elements to consider are: Greenhouse position; shape of roof; type of glass and any possible coating on the glass and attention to condensation. Over the last year, Kempkes and colleagues have carried out measurements in order to calculate the optimum properties for a greenhouse roof. A consortium of companies is now going to further develop a trial greenhouse of around 500 m² and eventually build it too.

“It’s been known for a long time that a roof ridge that runs north-south is, over the course of a year, more advantageous for light penetration, but an east-west position actually lets in more light during the winter. In the winter the sun is very low and so the angle of incidence of direct light (if the sun shines) is very small. If the sloping edge of the roof is positioned towards the south (such as in an east-west orientation) then the most light enters,” he says.

According to the calculations this can make a difference of 30% to the amount of incoming light (380 opposed to 290 Wh/m².d) in week 2 (January). This only applies to the direct light; the hemispheric transmission (the diffuse light which comes from all directions when cloudy) is independent of the greenhouse orientation and remains the same. 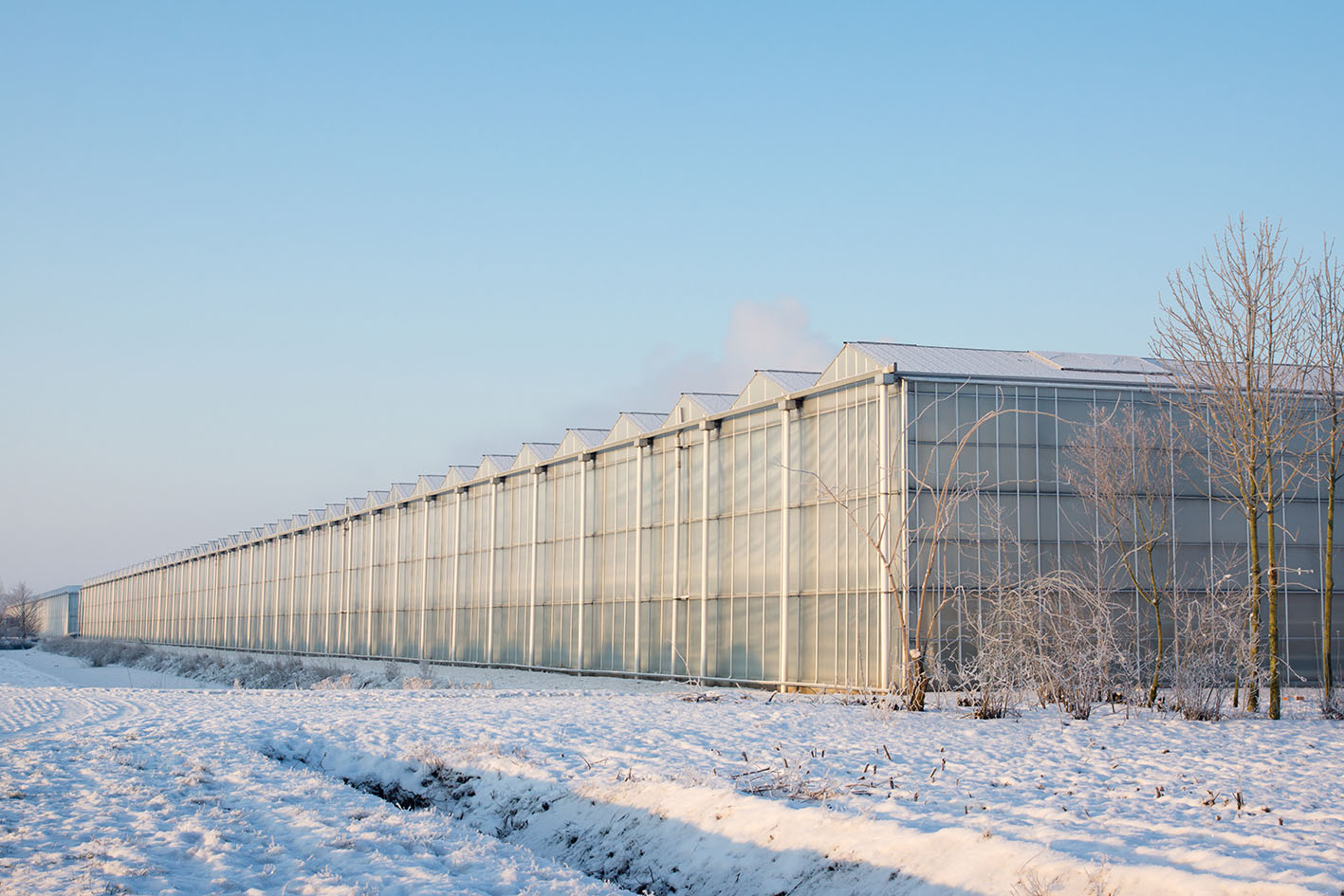 “In addition you can optimise the shape of the roof for better light entry in winter,” says the researcher. “In the winter there’s no direct light entering from the north side so optimisation should focused on the south side instead. Then you get a saw-edge shape: the southern part is upright, the northerly part runs off at a small angle. Such a saw-edge has a small benefit when compared with a symmetrical roof.”

Diffuse light has a positive effect on production and quality in virtually all crops. This also applies during the winter months, providing no light loss occurs while making it diffuse. Kempkes points to an interaction between light and its reflection off the greenhouse components. “With a diffuse roof the light is spread in all directions and a small part of the light runs nearly parallel with the roof. It bounces against parts of the construction and is reflected or absorbed. Everything that is absorbed is lost. So the construction has to reflect light as much as possible. Ideally, it should be all chrome plated but this is not feasible. On the other hand, corroded aluminium that is several years old is definitely not ideal at reflecting light.”

During the winter, light enters at a very low angle. Above an angle of incidence of 40° transmission quickly reduces and at 90° it is zero; the light then runs parallel with the glass panes. With an AR-coating (AR = anti-reflective) reflection is reduced and hence transmission is increased. After all: reflection + transmission + absorption must always amount to 100%. But the current AR-coatings have their limits. “With such a coating you move the whole transmission line upwards, but what you really want is a coating that significantly increases the transmission specifically between 60° and 90°. This is where most is lost and therefore where there is most to gain,” he says.

Also the way in which the water condenses on the glass has a big impact. In winter, the glass is always covered with condensation. The combination of the glass (or plastic), the surface structure and any coating present determines the way the water condenses. “An hydrophobic roof causes large water droplets to form; consider water droplets on a greasy surface. That is very unfavourable for light penetration. There are some examples in which this accounts for an 8% light loss. A hydrophylic roof causes water to form a film over the glass. This alone improves the light penetration a little (1-2%) compared with dry glass.” Therefore it is very important to take this into account. With a hydrophilic coating, such as AntiCondens by Mardenkro, it is possible to improve the transmission in the existing situation if condensation droplets are visible.

Lastly, Kempkes points out an aspect usually underestimated. “Keeping the roof clean, both inside and outside can make a difference of 10% light penetration. So attention beforehand pays off. If you notice that it’s dirty you are already very late.”

And what makes the most difference? “The most benefit can be gained from the combination of preventing reflection (greenhouse position and coatings), reflective construction parts, attention to condensation and keeping the glass clean.”

The research is funded by the program Kas als Energiebron (Greenhouse as Energy Source), a partnership between the government, research institutes and businesses that continues until 2017.

Vegetable and ornamental crops can produce much more than they do at present if the climate conditions are always ideal.