A wide range of flowering and green pot plants performs better under ReduFuse. For some types the increase in productivity or acceleration of the production cycle is quite substantial. That is especially true if the grower can allow in more light. But even at an equal level of light, diffused light leads to less stress and therefore better growth and improved quality.

In a greenhouse without a light-diffusing roof, areas of light and shade always appear when the sun shines. This uneven light distribution is not ideal: When the light is strong, the leaves and flowers in the well-lit areas experience stress while the leaves in the shadow under-perform. They could easily assimilate more if they received more light.

A diffuse coating solves both problems of stress and under-performance. The even light distribution ensures that the top of the plant does not become too hot. At the same time, the leaves lower in the leaf canopy can contribute more to production. 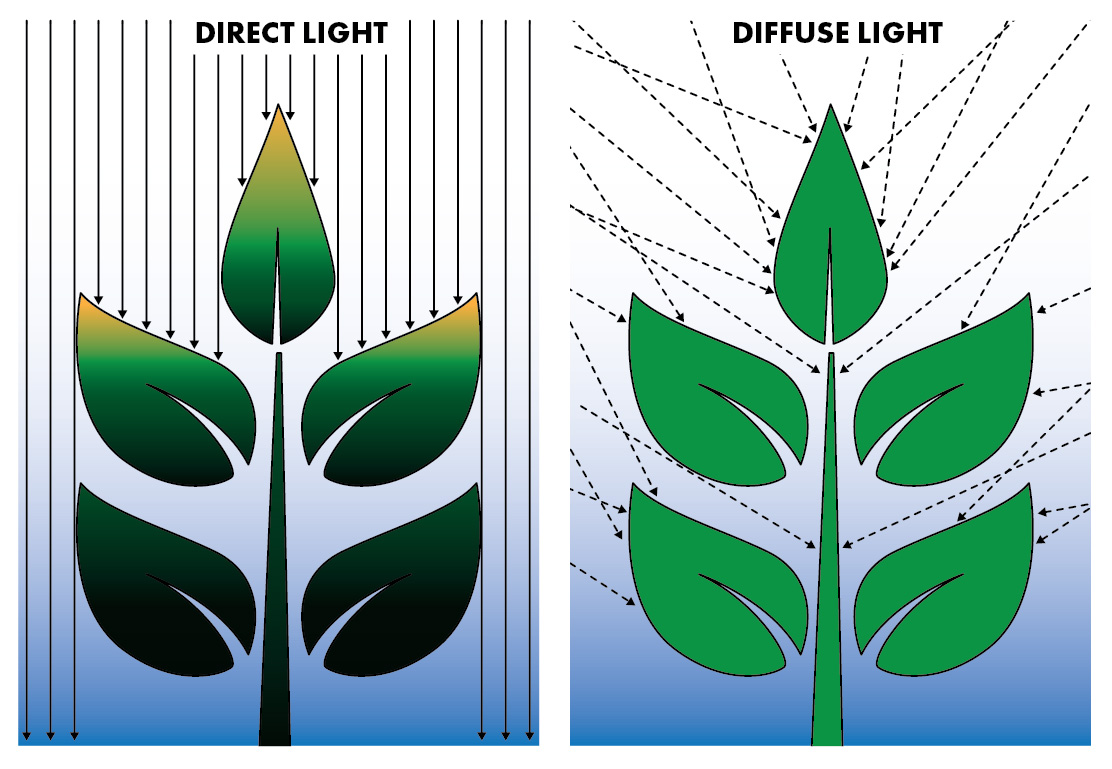 Years of experience have been gathered regarding fruit vegetables. More recently a lot of expertise has accumulated on pot plants, both in horticultural research as well as in practise.
In general, pot plants grown under ReduFuse form more leaves towards the bottom of the plant. They are also more resilient to changing weather, especially in the spring. Due to the low stress level, the speed of development and quality rise.

Because the plant is under less stress, the grower can allow in more light. However, it is advisable to use the usual light level when first using ReduFuse. Then, if it seems that the plant can take more, start to shade later in the day than usual. In this way you let in more light. Horticultural research has shown that many plants can handle more light than is commonly used, if the grower succeeds in maintaining the air humidity at a high enough level.

Because the plant temperature is lower under a roof that diffuses light, there are consequences for the climate control. If the grower doesn’t change the settings, the plant will warm up slower in the morning. This can be an important advantage in the summer but you certainly don’t want this in the spring. Therefore it’s important to steer the plant according to temperature, preferably plant temperature rather than air temperature. In general it’s sufficient to adjust the air vents.

For sensitive crops – without a coating – it’s necessary to shade quite early in the year. If the grower is forced to frequently open and close the shade cloth, it creates a yo-yo effect and the plants suffer. When the screen is open it’s too light and when the screen is closed it’s too dark. This is no longer a problem under ReduFuse. Therefore growers with sensitive crops apply the coating in week four or five, depending on the weather. With such crops it’s possible to apply ReduSol later in the spring over the first diffuse coating, as soon as the plants need to be well shaded. In this way a grower can allow in more light during the spring while in the summer is still guaranteed of having optimal shade protection.

Everyone who switches over to a diffuse coating notices that the crop grows differently. With pot plants it can result in a different appearance. The consequence of this strongly depends on the type of plant and the market. Sometimes a heavier plant is more popular with the trade. But with other crops the grower will want to adjust the cultivation period to continue to deliver the same quality. In research trials the cultivation period for anthurium was six weeks earlier; in a commercial nursery a three-week reduction was achieved. Therefore it does have consequences for the cultivation strategy within the nursery.

More and more pot plant growers are becoming convinced of the benefits of diffuse light. Due to the large assortment of ornamentals we don’t yet have experience with all crops. However, it can hardly go wrong. So far, horticultural research has failed to show any disadvantages caused by diffuse light.