Mardenkro is continuously developing horticultural coatings. We want to offer the ideal coating for your greenhouse and crop in as many situations as possible. At the beginning of 2014 we introduced a new diffuse coating that keeps out heat: ReduFuse IR.

In 2004 we were the first manufacturer to introduce a coating that reflects heat with the characteristic that it simultaneously transmits large amounts of light: ReduHeat. This was a revolution in horticulture because until then only shading substances were available which, in addition to blocking out heat, also kept out a proportional amount of light. For some crops this is the desired situation but other crops benefit from a lot of light and less heat.

What is the difference between ReduHeat and ReduFuse IR? The biggest difference is the degree of diffusion (haze). Using 22 buckets per hectare, the diffusion (haze) of ReduFuse IR is 72% and of ReduHeat it’s 41%. Both coatings reflect a part of the infrared light and transmit a large amount of light for growth. Infrared radiation can be divided into Near Infrared (NIR) and Far Infrared (FIR). The NIR is in the spectrum from 780-3000 nm and the FIR from 3000-10000 nm. This radiation is hardly used by the plant for plant processes, but it is important for warming the crop and the greenhouse.

Both ReduHeat and ReduFuse IR reflect heat in the region from 780-3000 nm, but do transmit a large amount of grow-light with a wavelength of 400-700 nm. As the protective layer becomes thicker, by using more product, the transmission of grow-light will decrease and the heat protection increases. The difference between the coatings is however, the degree of heat reflection.
This becomes clear in the chart below, which shows the transmission through a layer based on 18 buckets ReduFuse IR per hectare and a layer of 24 buckets of ReduHeat per hectare. Comparing ReduHeat to transmission through normal glass, about 8% more PAR light and 20% infrared light is reflected. In the case of ReduFuse IR the reflection of infrared light is about 15% at 8% PAR light reflection, compared with the transmission through glass. All these values are measured hemispherically, which means this is the value based on the average angle of incidence of the sun during the day. If it was only measured perpendicularly, which is the case of the values communicated by the manufacturers, the figures for the transmission of grow-light would be more positive. 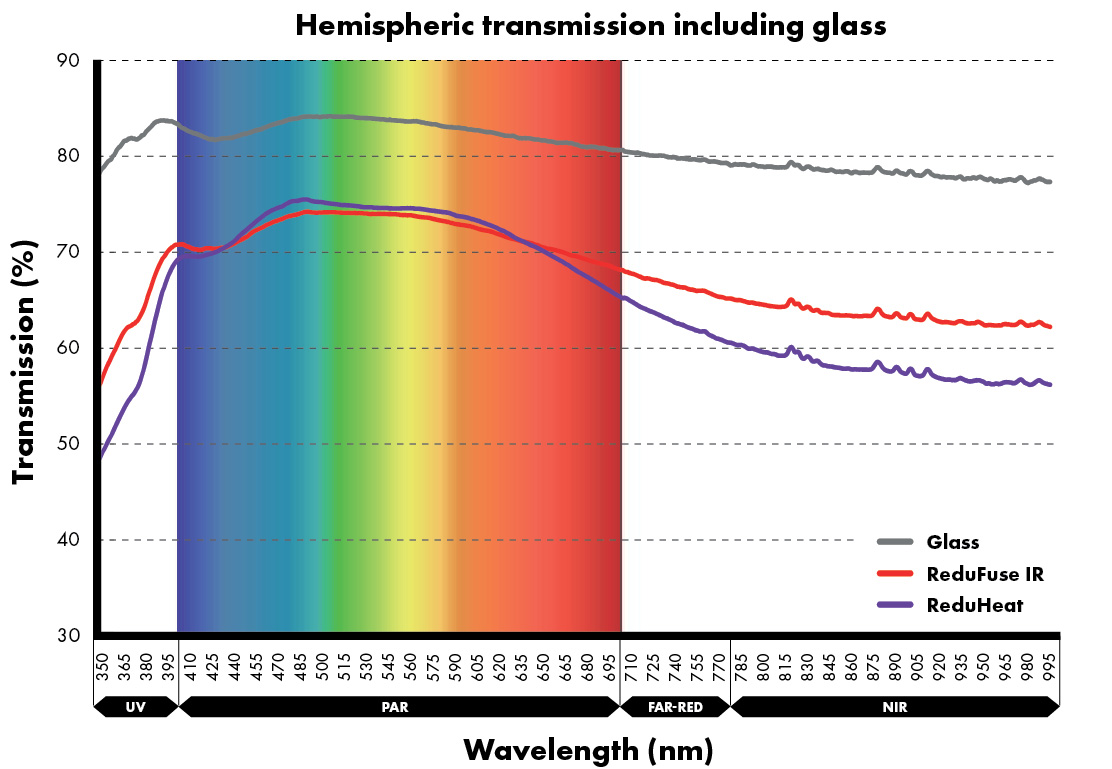 Both ReduFuse IR and ReduHeat are widely used in ornamental horticulture. Growers who want to block out the maximum amount of heat choose ReduHeat. Now that it’s possible to combine heat reflection with diffuse light, we see a shift towards the use of ReduFuse IR. The reason for applying ReduFuse IR is that flower temperature remains lower with diffuse light, due to the reduction in direct radiation, despite the somewhat less heat protection afforded by ReduHeat. This improves flower colour and can prevent quality problems such as bud burning occurring. We also notice better outgrowth of the shoots when using diffuse coatings because more light penetrates to the bottom of the crop.

Early in the spring Phalaenopsis producers tend to apply a layer of ReduFuse IR during the cooled growth phase. In this way growth is maintained at an optimal light level and the greenhouse is prevented from heating up too fast. During May they then spray over a layer of ReduSol because from then on the light intensity is too high for this crop.

Regarding chrysanthemums the choice between ReduHeat and ReduFuse IR varies. Both coatings have a positive effect on flower colour. On nurseries where the crop easily becomes generative and sometimes buds form too quickly then there is a preference for ReduFuse IR in order to stimulate more growth. ReduHeat is a better option for the more vegetative crops due to the higher infrared reflection  and the modified red:far-red ratio.

These coatings are hardly used in vegetable horticulture in the Netherlands. Instead growers usually choose the ‘normal’ ReduFuse to maintain maximum light transmission and yet still take advantage of the diffuse light. In southern countries, where the light level is higher and temperatures run high, ReduFuse IR is used frequently. Because diffuse light offers many advantages for growth and fruit quality, vegetable growers prefer to use ReduFuse IR above ReduHeat.

The effect of diffuse light is still not proven in gerbera production which is why ReduHeat is recommended.

The wavelengths of red light are 600-700 nm and far-red 700-780 nm. The ratio (coefficient) red:far-red light affects the growth and development of the crop. A smaller coefficient - a lot of far-red compared with red light -results in longer growth and fewer shoots. With a larger coefficient the crop will generally remain a little shorter. The red:far-red coefficient is larger with ReduHeat than with ReduFuse IR, so the crop under ReduHeat will in general remain shorter, especially during sunny weather. During cloudy weather the coefficient in the natural light is already much greater so the coating hardly has any impact.

Due to the higher capacity of ReduHeat to reflect infrared light, the plant, despite the lower leaf temperature, will respond more generatively. This is in contrast to ReduFuse IR, which due to the greater scattering of light (diffusion) shows more vegetative growth. Therefore it is important to continually adjust the greenhouse climate to the situation and to choose the best coating for your situation.

Since the launch of ReduHeat in 2005 users often ask us if it is possible to combine different ReduSystems coatings with one another. Just to make it clear, when we talk about combining we mean ‘layering’ one coating over another, not mixing the products because that can definitely cause problems. We...

At the forefront of horticultural innovations

Mardenkro maintains close contact with scientific researchers and is a member of the Club 100: a group of prominent horticultural suppliers that helps finance and steer research at Wageningen Greenhouse Horticulture. This way Mardenkro is at the forefront of horticultural innovations.