The plant uses barely fifty per cent of the sun’s radiation energy for photosynthesis. This part of sunlight is called PAR-light. Within this range all the wavelengths have a function, contrary to what was once thought.

Plants use light for two things: photosynthesis and photomorphogenesis (= control of shape and development). A lot of light is needed for photosynthesis; much lower levels are needed for controlling shape and development.
The light that the plant uses for photosynthesis is called PAR-light, short for Photosynthetic Active Radiation. Its wavelengths lie between 400 and 700 nm. The range for photomorphogenesis is somewhat wider, from 300 nm (UV-light) to 800 nm (far red). So you shouldn’t just cut off the spectrum between 400 and 700nm because then you disturb other processes.

Not all light within the PAR range leads to an equal amount of photosynthesis. This is shown by the McCree-curve. There are clear peaks in the red and blue; in between is a trough. The specific shape of the curve has led to quite a few misunderstandings. The most persistent one is that green light is not important. Firstly, it’s clear to see from the curve that photosynthesis in the green part is somewhat lower, but certainly not zero. Secondly, the chart is based on measurements taken on individual leaves. The response by the whole crop is slightly different and the largest difference is within the trough of green light. When considering a whole crop you hardly see a trough in the green area. The explanation is as follows: The green part of the light that falls on the first leaf is used only partially. The part that is not used travels further to the leaves underneath. Total utilisation is therefore very high. 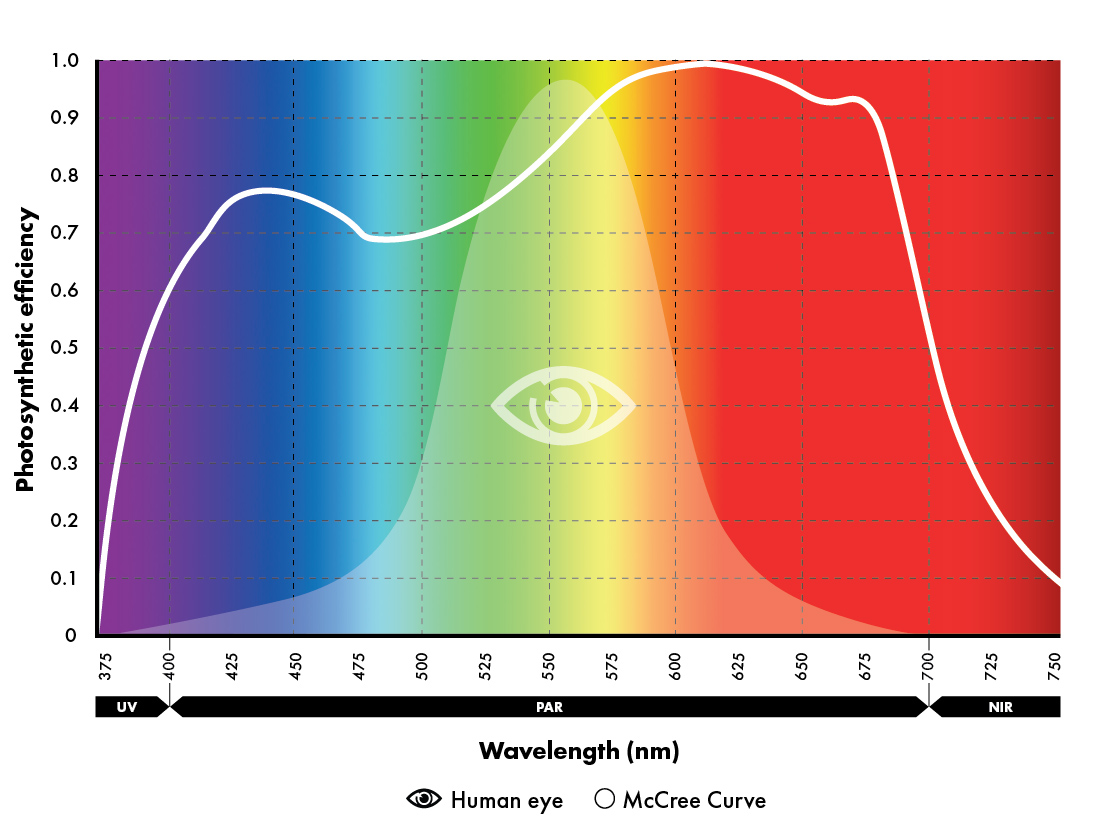 The sensitivity of the human eye and the plant to light vary greatly. The sensitivity of the human eye is at its highest exactly where the trough in the McCree-curve occurs. That means that you can never judge the suitability of a particular sort of lighting or coating using eyesight alone. Nevertheless the old lux indication is based on this. It is based on the human eye and it is often used to indicate the intensity of assimilation lighting. Thus you get a totally false impression. It’s slightly better to use the energy content of the light as a measurement but this is also not perfect.

Light falls to Earth as particles. These particles are called photons. Depending on the light colour, the photons contain a different amount of energy. For example, blue photons contain a level of energy that is 1.75 times higher than that of red photons. But that doesn’t matter for photosynthesis. This is dependent on the number of photons, not their energy level. Therefore it does matter how you measure light.

With instruments such as a solarimeter it’s possible to measure the energy level. This is expressed in J/cm² or W/m². It gives an indication of what the plant can do with the light but it is not very precise. Blue radiation is over estimated and the red light is under estimated. From a plant science point of view it is therefore better to express the PAR-light in µmol/m²/s. This is the number of photons of PAR-light that fall onto one square metre within one second. You measure this with a PAR-sensor. When there are sufficient PAR-sensors in the greenhouse the measurements are reliable enough to use to control the conditions (for example, screening, lighting and CO2-dosing). A disadvantage is that µmol/m²/s is a unit that is difficult to imagine, and has not yet fully taken hold.

The plant uses light also for its shape and development. This is known as photomorphogenesis. Several studies using ‘coloured’ foil and LED lights prove that it is possible to influence plant development by adjusting this light. The coating ReduHeat leaves the natural light spectrum over the entire PAR-range in tact, but it produces a higher red:far red ratio which leads to compacter growth. ReduFuse IR does this as well, but to a lesser extent. ReduFlex Blue allows through relatively less blue light so that cells elongate more. The other coatings on the market within the ReduSystems range have virtually no effect on photomorphogenesis. As more becomes known about using this light, alternative ReduSystems coatings will come onto the market that by means of light ratios will steer the crop according to specific characteristics. To achieve this goal Mardenkro is closely involved with centres of knowledge within the horticultural industry. In addition Mardenkro is proactive in searching for possibilities in different cultivation situations where improvements can be achieved by means of controlling the light.

Technology is not the only way to save energy. Savings can also be made by making better use of the properties of the plant.

Uniform coating is an art

An evenly applied coating is very important. Otherwise an uneven amount of light enters the greenhouse and that can result in a non-uniform crop or problems with the climate control. Gert-Jan van Hattem, of spraying specialist HPW Spuittechnieken, talks about the art of coating.

In search of the optimum light level for potted plants

Diffuse light benefits almost all potted plants that have been tested in trials. Often the grower can allow in a greater amount of light, which will make the plants grow faster.